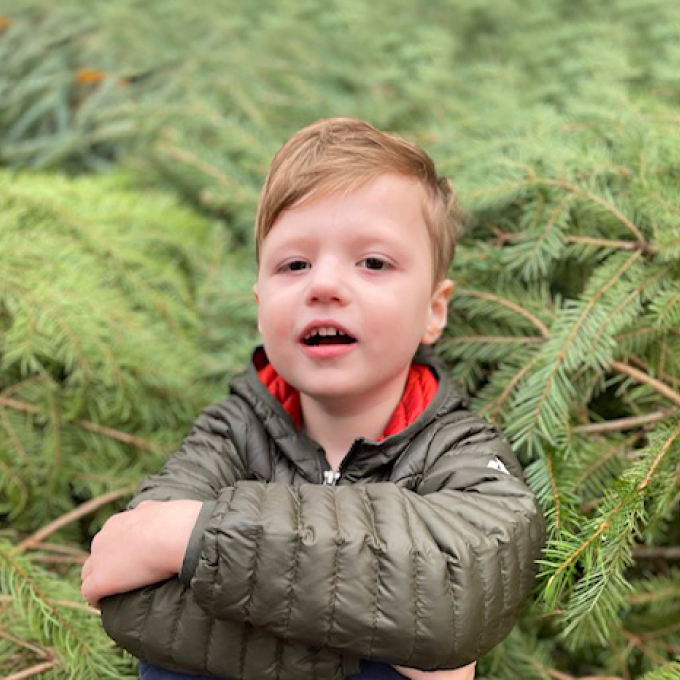 ⟵ Back to Patient Community Stories

Every family’s experience with Dravet syndrome is unique. Lauren, a school teacher, mother of four and a self-described “beach junky,” shares a day in the life of her youngest son, Finn, who lives with Dravet syndrome, and how these daily challenges impact their whole family.

Please introduce us to you and your family.

I am a high school English teacher, been doing this for 15 years. I teach at an urban high school that both my husband and I went to. My husband does commercial work for a financial services company. We have four boys who are all two years apart from each other, meaning it is always very loud and rambunctious in our house.

We do like to spend as much time outside as much as we can. Our oldest is super involved with baseball year-round, and our two middle boys are really into lacrosse. However, as a family we are not able to do as much together as our life has changed since Finn’s diagnosis. 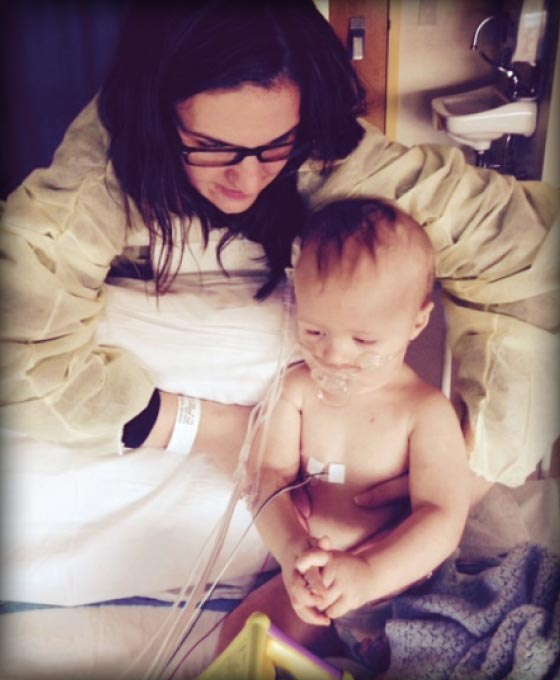 As a family we are not able to do as much together as our life has changed since Finn’s diagnosis.

Can you tell us a bit more about Finn?

Finn turned six years old in February [2021]. He is quite the wrestler these days. Finn, as well as the other boys, are obsessed with WWE. Finn also loves music, being around his brothers and going to school; he gets so excited when the bus comes.

However, because of Dravet syndrome, we’re in a hard place right now, given he seizes every day. It’s hard. He’s not really learning anymore. We haven’t really had a burst of cognition, comprehension or language in a long time, and that’s really hard to watch.

What does a typical day look like for your family?

Our day is very structured around Finn’s schedule. The day never ends, and there’s never that time out when the kids are in bed and you’re done. My mornings start around 4:30 a.m. with crushing all of Finn’s meds for the day. Because I am out the door by 6 a.m. for work, my husband does the mornings with Finn, which involves trying to get Finn fed and meds in, as well as dressed in time for the bus at 7:30 a.m. Things that are typically very simple are not simple with a child that has Dravet.

Things that are typically very simple are not simple with a child that has Dravet. 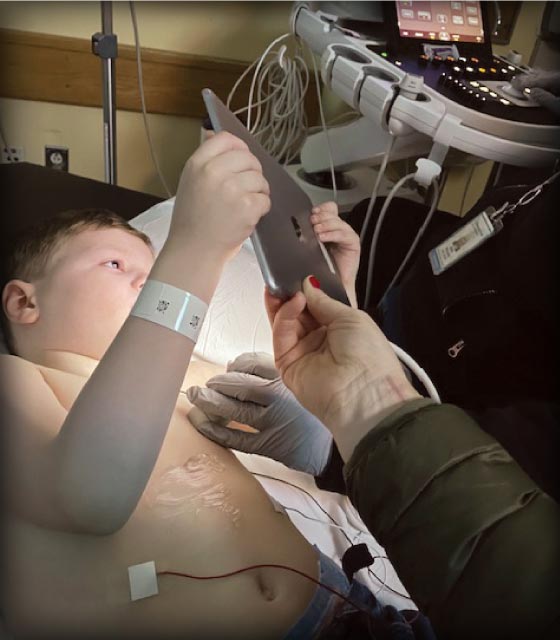 Feeding time is long; it can take up to an hour or longer. As much as Finn’s good about eating, he’s terrible about eating. Sometimes meals can be great, he’ll eat everything, and his meds go in. Then there’ll be the meal where he spits out the food that has the medication and now all of that is all over him and the floor. Or he is not hungry or still in recovery from a seizure. When he doesn’t want to eat or spits out his food, we get panicky that he’s not going to have enough oil or protein in his meal and we’re going to have more seizures. It sounds crazy that he’s that sensitive, but he is.

Finn kind of assists with getting dressed but now that he’s bigger, it can be a challenge. We just want him to lift his legs so we can put his pants on and he’s not listening or he’s not getting it or he’s not doing it. He’s kind of potty-trained but he’s certainly not when it comes to bowel movements. So, if he does that then it’s the whole process again. Everything goes a little longer than you expect it to.

We end the day with our bedtime routine, which is the worst it’s ever been right now. We recently got approved for a pulse oximeter monitor, so that’s kind of helping. Finn’s been so good about allowing us to put it on, but it’s another alarm that we have. When we put him to bed, if we don’t stay in in his room and wait for him to go to sleep, he gets up immediately. So, one of us is waiting for 30 minutes, 45 minutes until he’s totally out and then we leave the room. This is when we get to do other activities, like eat our own dinner.

However, within 30 minutes, typically Finn is awake again, so one of us goes back upstairs and puts him back to bed and has to sit there until he falls back asleep. Then, we do that until we get tired, which is usually around 1 a.m. This is around this same time his nighttime seizures start, meaning we’re awake during the seizures and the aftermath of the seizures. So, we bring him to bed with us to make this a little easier to monitor. The next day is really dependent on when these seizures stop.

You mentioned that Finn is in school.

During the school year, Finn is outplaced to a therapeutic school to which he takes a bus every day. He has had seizures on the bus and at school, and we have had to troubleshoot some issues. While he is at school, we are constantly worried if they will notice that if he is having a seizure. And if he does have a seizure, we worry if they will they call us. Finn can’t be treated with certain medications so I have asked the school to call me immediately so I can tell the EMTs what to do or how they can make this experience work for us. I had a phone call with a dispatcher once and she’s like, ‘Well, as of five minutes ago he was fine.’ And I’m like, ‘Five minutes ago? My son could be dead within five minutes.’ You can’t just expect me, or any parent, to sit here and not know what’s happening live on the scene.

In addition to school, Finn has home therapy most afternoons, unless he has had a seizure on the bus home, which means he will be in recovery and not awake for home therapy.

How are you able to fit in other activities and the boys’ sports?

We try to keep life normal for our other boys. So, to get ready and out of the house for a sports game or a practice or whatever, it becomes a mad dash to get Finn and all of his stuff ready.

We’re so limited in what we can do as a family when it comes to things that we would need him to be independent for because he’s just not. Dravet syndrome is a whole family syndrome. 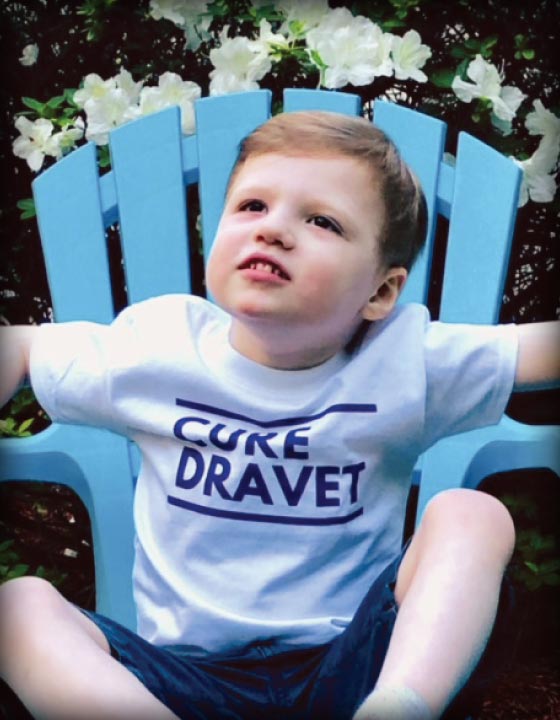 There are always eyes on Finn. For example, if I’m in the kitchen helping somebody with homework and Finn is in the playroom, I’m checking in with my other boys to say, ‘Where’s Finn? Is he okay?’, ‘What was that? What’s that noise?’ and so now my other boys are conditioned to say, ‘Mom he’s fine, he’s not having a seizure, Mom no seizure, Mom no seizure” which is another sad thing that’s now our norm. Or if I want to take a shower at night, I need to make sure that Dad’s there so he can watch the monitor. Or in order for my husband to mow the lawn for two hours, he needs to make sure he does it at a time when I’m home to be with Finn.”

If you were able to, what would you want to do as a family?

A really great day would be if we could hike as a family then go to the beach for a picnic lunch. I hope that one day we can do that.

Our family motto is ‘Choose Hope.’ It was something we thought of early on that we just needed.

I also have a card by my bed that I have had since high school that reads, ‘When it seems you will never smile again, life comes back.’ For me, personally, I have to hold on to this hope.

We would like to thank Lauren for sharing a piece of her family’ personal journey with us. If you would like to share your family’s story, please email patientadvocacy@encoded.com. By providing your information, you agree to allow Encoded Therapeutics to collect the name and email address provided and to be contacted by Encoded and its partners using this information.